The variety of game bird species available ensure a varied game bird experience. In our northern areas, huge flocks of helmeted Guinea Fowl thrive. Seven species of Francolin, including the extremely challenging Grey wing, in the vast mountains of the Eastern Cape, above 6,000 feet; and hunted over well-trained pointers. Waterfowl, of which there are twelve varied species, including the huge Spur winged Goose, shot from pit blinds and over decoys or flighting back to their roosting pans. For hot barrel bird shooting, nothing can beat the enormous flocks of rock pigeons & doves shot over sunflower and maize.

Game bird shooting safaris tailored to suit each groups needs, which can include photography, including sight-seeing for plains game locally, catering for non-shooting companions. Due to the different game bird shooting options and species, emphasis placed on quality and variety rather than quantity. However, early season shooting always sees enormous bags of rock pigeons.

We recommend using 12 Gauge semiauto shot guns, as ammunition is easily available and cost-effective in comparison to twenty bore cartridges. Four hunter’s minimum; should you wish to book the entire Lodge for your group’s game bird shooting safari, we cater for single clients or two friends within a shared Lodge. 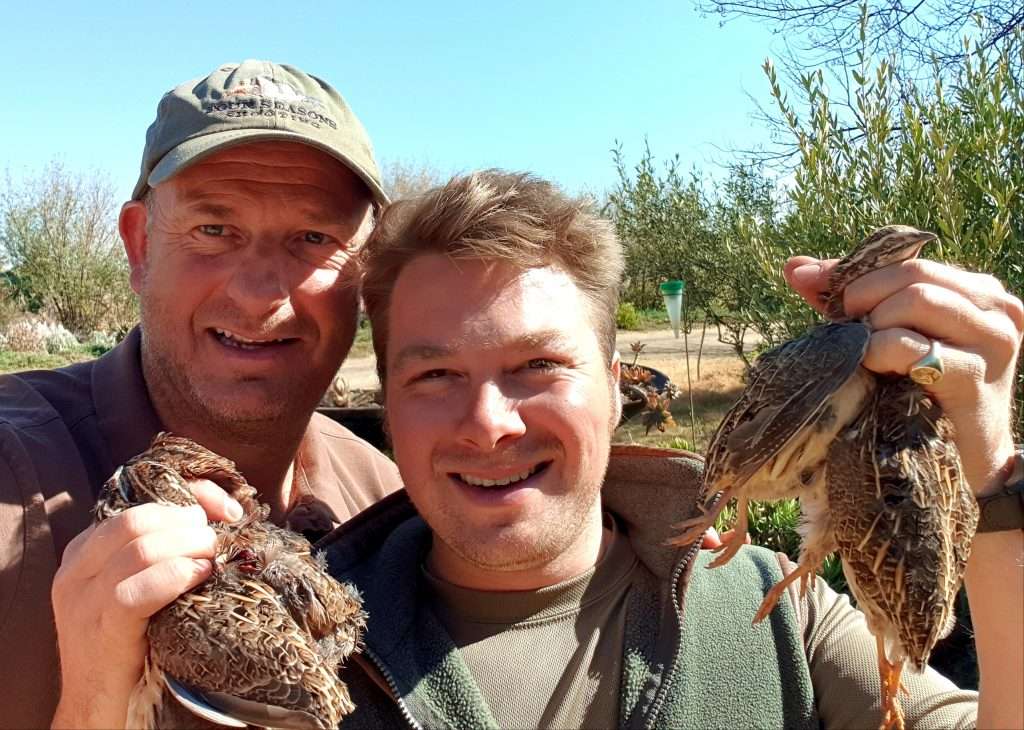 Without a doubt an exclusive and unlimited game bird shooting trip, world-class. With your private Free State game bird shooting lodges, we move from one shooting area to the next as needed. Guns travel by 4×4, usually a short distance, shooting Doves, rock Pigeons, Ducks, Geese, driven Guinea Fowl & Francolin.

This picturesque six-day sojourn, designed for game bird shooting and plains game hunters, starts in Johannesburg, winding our way to Bloemfontein within the Free State of South Africa. First stops are Virginia with two full days of Upland game bird shooting. With your journey to Bloemfontein and Kimberley, Hunters enjoy two days of game bird shooting with a day’s break if asked. Travelling onto Luckhof on the Orange River, a waterfowl paradise, hunting Egyptian and spur wing geese around the flooded salt pans, after a memorable water bird hunt, we will travel on to Tweespruit for your final few days of mixed game bird hunting.

The farmhouse Suites; accommodate two clients per room, in either twin or double beds and have a lounge area and en-suite bathroom with shower, offering modern convenience and comfort. Panoramic views from the bar, where you can relax with a drink and watch the African countryside, as well as dining room and lounge. Colonial design and the old-fashioned furnishings help transport you to the bygone era of the 1800s. modern conveniences will allow you to enjoy your trip in true rustic African comfort.

Guineafowl and francolin shoots are walked-up, with a choice of driven game birds, mimicking the classic English game bird shooting with a distinctive African flavour. We make use of up to 20 African farm workers as beaters. Unlike the driven pheasant shoots in England, where you might not see more than two flaggers, this colourful tribal singing bunch will come right up to you, with game birds flushed at your feet. Do not be surprised when other creatures like Steinbach, warthog, or duiker break from the cover. If you are a bit out of breath after being a walking gun, you will sympathise with the odd pearl of sweat on the beater’s brow, South African beaters often cover up to three miles per drive, flushing game birds towards you. Flocks must flush at least twice before the game birds reach the gun line, to confuse the game bird flock. We try and supply at least four drives in a morning or afternoon game bird hunt, resulting in the beaters covering on foot around twenty miles. As the eerie chorus of the south African beaters move closer, sympathising with how the British soldiers felt in the Zulu war, becomes hair tingling reality.

Water birds shot during the early morning and late afternoons, as they come in to feed on harvested sunflower and maize stubble fields. Strategic planning starts the day before each hunt, with regular reconnaissance due to birds consistently moving from freshly harvested field to standing teff, upon arrival we will ensure that your pit blinds are placed right under the flightline.

The variety of game birds on a duck and goose shoot is unfathomable, where shooting eight species of water birds by a single gun in an afternoon or morning flight is the norm. The game birds’ range, amongst others, from the enormous spur winged goose which can reach a weight of up to twenty-six pounds with a wingspan on occasions reaching five feet, to the Egyptian goose, the white-faced whistling duck, the yellow billed duck, which is an African version of the English mallard, to the swift little red billed teal.

The game bird shooting is always fast paced hunting, with the wide variety of game birds coming in at different speeds and height, making for spectacular shooting. Decoys used and game bird picker uppers aid each gun at the end of each hunting session.

Rock pigeons and doves are shot flighting from butts. Aided by decoys in the late season. These birds will quieten down the best of game shots, as they rocket over your head in their packs, hundreds at a time. Favouring instinctive game shooters, leaving no time to calculate lead. Five varied species of doves are legally shot. Excellent quarry for hot barrelled game bird shooters.

Laundry is collected daily, washed, and returned to your room the following day. (Service included within your package price)

UK clients will be flying to Johannesburg with Virgin Atlantic, South African Airways, or British Airways, all of which are experienced with transporting guns, however, British Airways have an additional £125 each way, gun handling charge. You must make the airline aware in advance that you are transporting guns. You must allow at least 4 hours at Heathrow for the check-in of guns. The flights always depart in the evening, so you fly through the night, and this will give you the evening of the next day for shooting.

Four seasons shooting importantly must be informed before or upon arrival at the Lodge because should you have any allergies or dietary requirements contact Julie. office@fourseasonsshooting.com

Each year thousands of travellers going to Africa visits one of our private travel clinics to receive travel health advice, vaccinations and malaria tablets.

Below is a list of vaccines that, during consultation with the nurse, will either be recommended

or must be carefully considered

for travel to South Africa.

Due to hunting at altitudes of around 5,000 feet, The climate is very dry and in the early morning the temperature can be -10 degrees, but by about 09:00 it will be quite warm, and as the day goes on you will be wearing short-sleeved attire as it reaches 20-25 degrees by mid-day. It will get cold at night, so for the early morning Game bird shooting, we suggest cold weather clothing, however, wear several thin layers as it will soon warm up and you will need to remove some layers.

Guests are not covered by ‘Four Seasons shooting in South Africa’ insurance. You must ensure that you have suitable personal medical insurance and third-party liability insurance for the duration of the safari. (BASC Insurance covers you for 60 days per year for shooting abroad). Whilst we maintain all reasonable care for the safety of our clients and their property while on game bird shooting safari, we will accept no responsibility for cost incurred due to illness, accident, or loss of any nature. You can be assured, however, of our full assistance in the case of an unfortunate event. (Make sure you have travel and illness insurance).

★★★★★ 5/5
“My boyfriend and I just completed the Gamebird Shooting holiday with Fourseasons. Everything about this holiday was amazing. It was well-organised and we always felt safe. The itinerary was perfect. We had a great group and a fabulous tour guide! He always made sure we were safe and comfortable. This was a once in a lifetime trip! Highly recommended.”
Theresa from Madrid, Spain October 8, 2019
★★★★★ 5/5
“We have been lucky enough to have Richard lead us through Africa game holiday. The trek was hard but so worth it. Richard and the rest of the guides are highly skilled and they took care of everything - food, camp, logistics and most importantly our health and safety. We will never forget this experience and we’ll definitely be back.”
Stewart from United KingdomFebruary 26, 2020