South African wing-shooting gives hunters a chance to experience hot barrelled shotgun shooting with a full catalogue of game bird hunting, A large variety, and diverse species list of water birds such as the Egyptian geese hunting and Spur-wing Goose including Duck & Teal are at the top of the list when it comes to water bird shooting, Alternatively, south African upland game bird hunting gives wing-shooters a once in a lifetime opportunity to shoot driven Guinea Fowl, Francolin and Quail Shooting over dogs, resulting in the ultimate wild game bird Wing-Shooting Holiday destination. 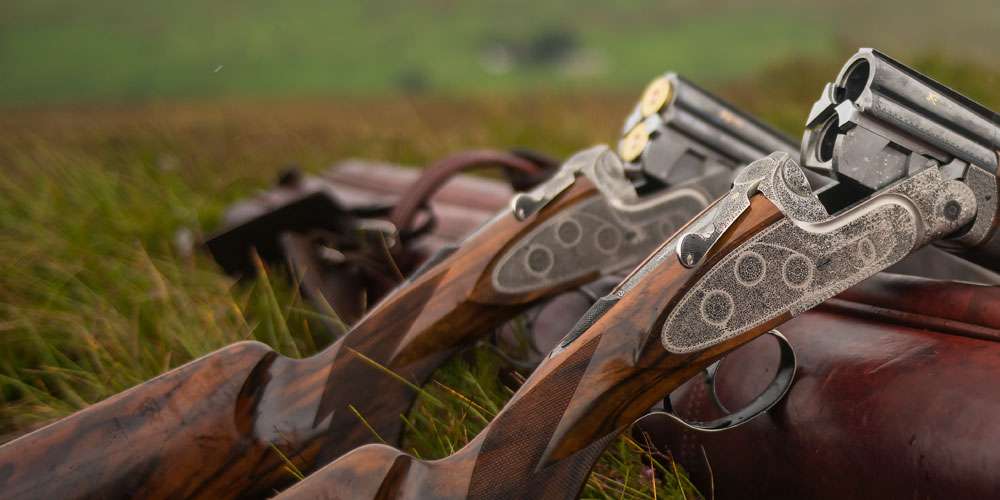 Nestled in the shadow of the Maluti Mountain range, between the Orange River in the south and the Vaal River in the north, are soft undulating hills covered with lush green grass and small lakes. In the Eastern Free State, you will find Tweespruit. A beautiful small town about one hour drive East of Bloemfontein, where you will find the home of Four Season’s game bird Shooting in South Africa, with plains game hunting and Wild Game bird shooting for the more adventurous Wing-Shooter.

Upon arrival, clients will be shown to the available accommodation from which you will be able to select the en-suite room of your choice. either in the main house or similarly from a range of rooms situated around the lodge compound. Drinks are provided in the lodge bar and then if you are not too tired from the traveling, we can set off for your first afternoon game bird shooting for Duck & Goose shooting or Franklin & Guinea fowl shooting.

That evening, you will have a freshly cooked meal in the home-style dining room. After dinner, you may retire to the bar or onto the patio to enjoy a nightcap in front of an open fire.
The night sky will be brilliantly clear, filled with stars and, as you begin to relax you’ll wonder why life cannot always be this way and maybe appreciate why we’ve been coming back here for over 23 years.

The first shoot of the day will start around 06:00 and can be either shooting Egyptian and Spur wing geese over decoys, from pit-blinds in stubble or furrowed winter wheat fields, or you can begin the morning flighting various species of duck as they move up and down the dam local systems. Once that flight is over at about 09:00, you will travel back to the Lodge for a lovely home-cooked breakfast. Those who wish to take it a little easier may snooze until breakfast.

After a hearty AL-Fresco breakfast, you will have a choice of  Rock Pigeon shooting over sunflowers from a hide using decoys and pigeon magnets, or depending on the flight line coming to the fields, it’s often possible to shoot flighting Rock Pigeons & Doves, these can be very challenging! as they fly into the fields from about 11:00 until 15:00 where they spend the next 3-4 hours wheeling around the sunflower stubble fields, before flying back to the distant mountains from 14:00 until 16:00. These birds fly in Partridge coveys from between six feet off the ground to three hundred feet up. NB: A good pair of sunglasses is recommended as shooting against a pale blue sky can tire the eyes very quickly.

Another challenging possibility that can be quite an experience is a driven Guinea fowl shoot in the style of a classic driven pheasant shooting. (Advance notice and a minimum group size of 10 people is needed)
Shooting Guinea Fowl in South Africa are quite different from their English counterparts because South African Guinea fowl coveys numbers vary from twenty up to 300/400 and with many eyes makes for a highly intelligent flock of birds – run like an old cock bird in January. The guide aims to chase them across the open plains using 4×4  vehicles in order to get the Guinea fowl coveys to flight twice break the super flocks up into small groups, birds will then sit tight making it possible to walk them up with GSP’s or with a walking gun line, If the guide gets it right you can hardly load fast enough.

A different strategy is for the guide to gather up a group of local farmers and divide them into two teams, one team will stand while the other team walks through the crops of maize whilst shooting.

After the Rock pigeon shooting & dove hunting, we break for a coffee and late afternoon snack and then prepare for the final wild game bird shoot of the day. This can either be a Duck shooting over lakes or flighting, setting up for the last hour of daylight gives us 30-45 minutes of great action as the waterfowl fly back to roost on the dams.

Once the duck flight is over, it is back to the lodge to warm up in front of the fire, before sitting down to dinner and a chance to recount the day’s activity and share the plans for the following day.

This schedule of Wild Game Bird Shooting is available daily.

As an alternative to the Four Season’s shooting at Tweespruit Lodge, would be to hunt at Luckhof, Four Season’s hunting wild waterfowl bird shooting Lodge, 4 hours west where we have concessions to shoot Egyptian & Spur wing Geese in large numbers on the Orange River, as well as ducks and pigeons. This would be a 2–3-day excursion and travel arrangements can be organised for you at no extra cost, travelling and accommodation are provided, but would need to be arranged at least 2 weeks prior to your trip.

Laundry is collected daily, washed, and returned to your room the following day. (Service included within your package price)

UK clients will be flying to Johannesburg with Virgin Atlantic, South African Airways, or British Airways, all of which are experienced with transporting guns, however, British Airways have an additional £125 each way, gun handling charge. You must make the airline aware in advance that you are transporting guns. You must allow at least 4 hours at Heathrow for the check-in of guns. The flights always depart in the evening, so you fly through the night, and this will give you the evening of the next day for shooting.

Four seasons shooting importantly must be informed before or upon arrival at the Lodge because should you have any allergies or dietary requirements contact Julie. office@fourseasonsshooting.com

Each year thousands of travellers going to Africa visits one of our private travel clinics to receive travel health advice, vaccinations and malaria tablets.

Below is a list of vaccines that, during consultation with the nurse, will either be recommended

or must be carefully considered

for travel to South Africa.

Due to hunting at altitudes of around 5,000 feet, The climate is very dry and in the early morning the temperature can be -10 degrees, but by about 09:00 it will be quite warm, and as the day goes on you will be wearing short-sleeved attire as it reaches 20-25 degrees by mid-day. It will get cold at night, so for the early morning Game bird shooting, we suggest cold weather clothing, however, wear several thin layers as it will soon warm up and you will need to remove some layers.

Guests are not covered by ‘Four Seasons shooting in South Africa’ insurance. You must ensure that you have suitable personal medical insurance and third-party liability insurance for the duration of the safari. (BASC Insurance covers you for 60 days per year for shooting abroad). Whilst we maintain all reasonable care for the safety of our clients and their property while on game bird shooting safari, we will accept no responsibility for cost incurred due to illness, accident, or loss of any nature. You can be assured, however, of our full assistance in the case of an unfortunate event. (Make sure you have travel and illness insurance).

★★★★★ 5/5
“My boyfriend and I just completed the Gamebird Shooting holiday with Fourseasons. Everything about this holiday was amazing. It was well-organised and we always felt safe. The itinerary was perfect. We had a great group and a fabulous tour guide! He always made sure we were safe and comfortable. This was a once in a lifetime trip! Highly recommended.”
Theresa from Madrid, Spain October 8, 2019
★★★★★ 5/5
“We have been lucky enough to have Richard lead us through Africa game holiday. The trek was hard but so worth it. Richard and the rest of the guides are highly skilled and they took care of everything - food, camp, logistics and most importantly our health and safety. We will never forget this experience and we’ll definitely be back.”
Stewart from United KingdomFebruary 26, 2020